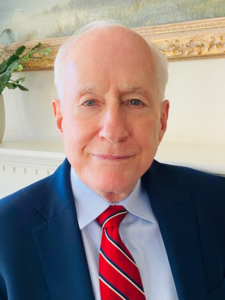 Honorable Jim Kolbe currently serves as a senior transatlantic fellow for the German Marshall Fund and is a member of McLarty Associates Board of Counselors.  He also serves on the boards of Freedom House, the International Republican Institute, the Transatlantic Policy Network and the Project on Middle East Democracy.  He is associated with Capitol Strategies, LLC, a consulting firm in Arizona.

Previously, he served in the United States House of Representatives for 22 years, elected for eleven consecutive terms from 1985 to 2007.  He represented the eighth (previously designated the fifth) congressional district, comprising the southeastern part of Arizona with Tucson as the main population area.

While in Congress, Mr. Kolbe served for 20 years on the Appropriations Committee, responsible for deciding the allocation of the budget and the terms for spending appropriated funds.  He was chairman of the Treasury, Post Office and Related Agencies Subcommittee for four years, and for the last six years of his tenure in Congress as chair of the Foreign Operations, Export Financing and Related Agencies.

With Capitol Strategies, LLC, Mr. Kolbe advises clients on congressional strategies.  With the German Marshall Fund he advises on a range of issues with an emphasis on trade and immigration.  He has received numerous awards and tributes, notable among them the George Marshall Award for Distinguished Service from the Unites States Agencies for International Development, the order of the Aztec from the President of Mexico, and distinguished service in trade award from the Washington International Trade Association.

He is a graduate of Northwestern University with a B.A. degree in Political Science and from Stanford University with an M.B.A.  He served in the United States Navy, including a year with the Coastal Patrol Forces (PCF) in Vietnam.  He retired as a Lieutenant Commander in the Naval Reserves.