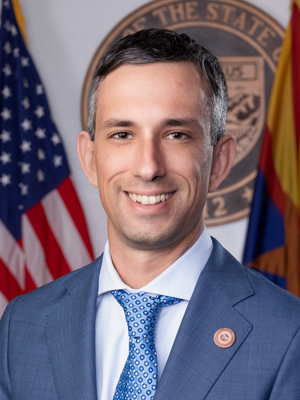 Sean received degrees in Political Science and History from ASU in 2008. Sean received his Master’s degree in Public Policy and Management from Carnegie Mellon University in 2013.

Sean serves on the Senate Appropriations, Senate Finance, and Senate Commerce Committees. In addition to those committees, he is intently focused on restoring education investment to our K-12 schools and higher educational institutions.

Sean has also earned national recognition for his work, including awards from Mental Health America and the National Emergency Management Association, and received a 20 under 40 Award from the Council of State Governments in 2021.

In addition to his work at the Senate, Sean also works as a Professor of Practice at ASU’s School of Public Affairs, where he teaches courses on leadership, ethics, and research methods.