The Arizona Budget Then and Now

Second Annual Release: The Arizona Budget Then and Now

Arizona Budget: Then and Now illuminates the change in Arizona state spending over the last twenty years.

During the 2023 legislative session, it is vital for citizens to be aware of the history of spending across the entire budget –the General Fund ($16 billion), and the approximately 1,200 Other Funds that spend another $47 billion.

A combination of economic volatility, record inflation, and unprecedented recent revenue growth – including a massive influx of Federal money since 2020 – create a unique opportunity for policymakers. The closest historical parallel may very well have been the Fiscal 2007 pre-Great Recession budget.

The findings of this report are generated from the annual appropriations reports compiled by the Arizona Joint Legislative Budget Committee and the Governor’s Office of Strategic Planning & Budgeting staffs. These reports draw from each of the annual legislative bills, which authorize funding for each state department. The reports include appropriations from all funds including General Funds, Other Appropriated Funds, Federal Funds, and spending from Non-Appropriated Funds. In general, “spending” and “appropriation” are used synonymously for appropriated funds throughout this report, unless explicitly clarified.

Appropriated Fund: Legislatively mandated segregation of monies into separate funds, which are specifically subject to the annual Legislative appropriations process. The General Fund (GF) is the state’s largest Appropriated Fund, as opposed to Other Funds (OF).

Non-Appropriated Fund: Technically, these funds are statutorily appropriated and therefore not subject to the annual Legislative appropriations process. Subject to available fund monies and state law, an Agency may freely spend these monies.

Federal Funds: Amounts collected and made available to this state by the federal government, usually in the form of grants or matching entitlement funding. Though not subject to Legislative appropriation, the Legislature maintains some control over a subset of Federal Funds through the ‘expenditure authority’ process.

Cash Balance: The remaining, unexpended and unencumbered cash in a fund at the end of a fiscal year. Specifically, revenues minus expenditures plus beginning balance.

Structural Balance: The ongoing balance in a fund at the end of a fiscal year. Specifically, ongoing revenues minus ongoing expenditures. This is intended to reflect the long-term fiscal stability of a particular Fund (typically the General Fund).

Annual Appropriations & Spending – Where It Goes How Much Money Does the Arizona State Government Spend? 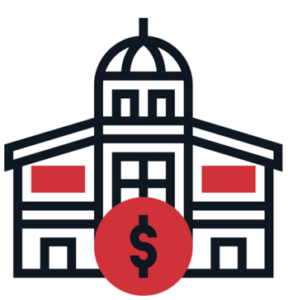 Critically, we hope this illustrates that a substantial volume of annual revenue (predominantly Federal funds but also including other non-State grants, gifts, and other sources) is not well captured in the existing annual budgeting and public oversight processes, and that over time a growing majority of spending and revenue occurs outside the General Fund.

Change in Real Total Spending Per Arizonan From FY03 to FY23

Since FY03, real spending per capita in Arizona has increased by over 56%. Most of that growth has occurred outside the General Fund, in Other Appropriated Funds and particularly in Non-Appropriated Funds.

Given most tax revenue flows to the General Fund, this implies Arizonans have enjoyed a relatively favorable State tax treatment over time but backfilled by an increasing reliance on non-tax fee and Federal revenues.

In terms of all funds – General Fund, appropriated and non-appropriated spending – nominal spending growth over the past decade has been concentrated in education, healthcare, and social services.

Enrollment Projections as of January

As of January, estimates of 2023 school year ESA enrollment range between 30,000 and 57,000 students. There were less than 12,000 students enrolled in the program during the 2022 school year, while there are approximately 1.1 million students enrolled in the state’s district and charter public schools. By law, ESA participants are entitled to 90% of the funding they would have generated under the state’s Equalization Formula (approximately $7,100 on average).

Over the four-year period characterized by the Covid pandemic and associated uncertainty, the budget oscillated wildly – with periods of very limited growth (FY20 & FY22) followed by periods of substantial investment (FY21 & FY23). The FY24 Executive budget proposal falls in the latter box, increasing spending by about $1.3 billion or more than double the average over the prior four years ($584 million).

Since FY18, General Fund revenue growth has exhibited rapid growth, far outpacing prior trends. While spending growth has increased as well, it has failed to keep pace , resulting in increasingly large General Fund cash surpluses. For example, for the 6-year period ending FY 23, average annual revenue growth was 10.9% – versus 9.0% average spending growth. This created the largest cash and structural surpluses in state history.

The Executive FY24 spending plan reverses this trend – growing spending by 10.3% even as projected revenues decline by –1.7%. For perspective, average annual spending growth over the prior 8 years (FY16-FY23) was 7.2%.

For the first period since the Great Recession and the 5th consecutive year, the Arizona General Fund remains structurally balanced. Further, despite the change in administration, the Executive budget remains structurally balanced in all four reporting years, by its own reporting. This is a stark departure from prior practice, when structural balance was both not a regularly reported metric and not realized by actual or budgeted numbers for years. The FY 2024 budget recommendation grows ongoing spending by nearly 6.0% and reduces the structural surplus to its lowest level since FY 2017.

Under the FY23 Enacted budget plan, spending would increase by $2.3 billion in FY 2023, and then total spending would fall by ($84) million in FY 2024. While the enacted budgets out-year spending plan is a combination of spending reductions, out-year spending increases, and Baseline adjustments – none of which have been updated for this chart except a technical assumption related to Federal Medicaid match – we believe the FY24 spending decline accurately reflects policymaker intent at the time to moderate state spending following increases.

While the Baseline will need to be updated to reflect changes in K-12, Medicaid and other programmatic funding changes since last year, given the information available to CSI at this time, we cannot accurately speak to those numbers or the reasonableness of the JLBC or OSPB baselines. Policymakers should make understanding these numbers a focus of early budget discussions.

Source: JLBC FY 2023 Appropriations Report, Governor’s FY 2024 Executive Budget Since 2016, Proposition 123 and the State’s permanent land trust have generated $3.2 billion in distributions to K-12 public education – 20% more than estimated when the proposal was adopted. By the time Prop 123 expires in 2026, it will have generated a cumulative $4.2 billion in additional K-12 funding ($500 million annually).  Strikingly, the trust balance is likely to rise to $8.1 billion during the Prop 123 period (31% higher than the $6.2 billion projected by JLBC in its analysis of the Proposition). Because most of the additional funding was added to the Base Support Level (formula funding), the loss of $275 million in land trust revenue will require a General Fund backfill. Policymakers have the option to either refer a continuation of the increased trust distributions to voters and/or reduce other components of K-12 funding that are not voter protected.

The Highway User Revenue Fund is one of the state’s largest non-appropriated Other Funds that is not Federally funded. Revenues are received from gasoline and vehicle taxes, and nearly 60% ($980 million) is distributed to local governments for road construction and maintenance.

While the Legislature eliminated (in part based on complaints from local governments) ‘HURF sweeps’ that removed approximately $60 million from local revenue shares, natural growth has added another $360 million in local revenues.

Arizona cities and towns rely primarily on municipal privilege, state shared income taxes, and state shared sales tax revenues for General Funds. Some but not all cities also levy a general property tax, and this share tends to be relatively small. For example, property taxes made up only about 6% of total revenue for the City of Phoenix in 2022.

Like the State General Fund, since 2017 city revenues have surged. Municipal sales tax collections have increased 61%; state shared revenues 35%; and the Wayfair remote sellers’ tax has exceeded budget forecasts by a factor of four. Relative to pre-2017 trends, the city revenue residual was over $2 billion by 2022.

As the Legislature contemplates spending for FY23, it is likely to particularly consider elements included in the Governor’s proposal. We have identified the following elements as being noteworthy: