In 2019, Arizona became the first state to recognize all licenses – without restriction or precondition – when then-Rep. Petersen introduced and Gov. Ducey signed HB 2569, which requires state licensing agencies to recognize an equivalent certification issued by another state and issue a reciprocal license to practice in Arizona. Since then, according to data provided to the Common Sense Institute (CSI) by the Goldwater Institute[i], Arizonans have applied for 5,269 licenses under the law, and 4,723 have been issued. Additionally, this legislation has become a model for many other states.

Utilizing the Regional Economic Models, Inc. (REMI) dynamic input-output model of the Arizona economy, and given the assumption that HB 2569 will increase economic migration into Arizona, the CSI analysis of this law finds that universal license recognition will most likely[ii]:

Generally, an occupational license requires a combination of time, effort, and money to obtain – which reduces the willingness of new workers to enter a license-gated occupation. This is especially true when the opportunity cost of entering the gated occupation is high; consider that someone who is already working or already has professional experience in another field must forego that income and experience for potentially several years before being able to practice the new (licensed) profession. This means there is very little, for example, transition of pharmacists into primary medical care, even though the educational backgrounds and professional experiences are similar. These frictions reduce economic efficiency and individual opportunity, while raising consumer costs. On the other hand, licensing requirements raise wages for incumbent licensed professionals, and may increase service quality (though the literature supporting this claim is mixed at best[iii]).

According to a 2015 White House Council of Economic Advisors meta-analysis of existing economic literature, occupational licensing reduces employment in gated industries by up to 18 percent, increases wages for incumbent workers by 10-15 percent, and raises prices for licensed services by 3-16 percent[iv].

Given these results, CSI estimates that occupational licensing in Arizona reduces state employment by 188,295 jobs (5.1%); reduces Gross State Product by $16.2 billion (5.0%); and raises overall consumer prices by 4.2% relative to an Arizona with no licensing requirements. Net-net, Arizonans would earn the equivalent of an additional $1,711 per year on average absent occupational licensing requirements. These gains may be offset by reduced service quality in now-unlicensed occupations, and overall gains would include losses to specific existing professional incumbents. The value of those foregone benefits of licensure are not measured here. 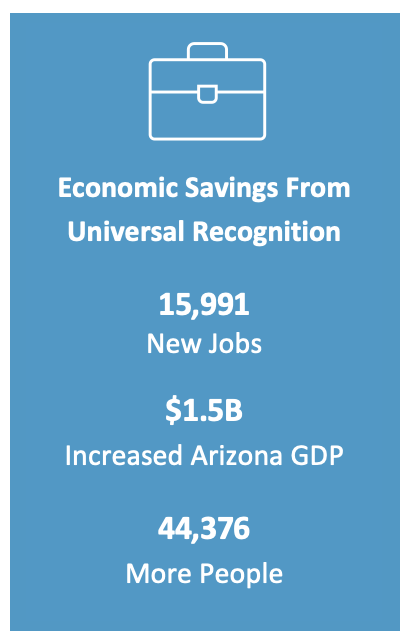 To assess the impacts of 2019’s HB 2569 on the Arizona economy, the Common Sense Institute utilized the REMI regional economic simulation model, as well as data provided by the Goldwater Institute. First, we identified the expected annual impact of the license recognition law on the pace of licensing in Arizona, as well as the specific occupations and industry classifications affected. As background, the new law went into effect on August 19, 2019 and since then there have been 5,269 applications for reciprocal licensure – resulting in 4,723 approvals, 29 denials, and leaving 521 pending. A 2017 study by Johnson & Kleiner confirms that occupational licensing significantly reduces the interstate movement of workers[v] – implying a significant fraction of these new licensees are likely to have been causally induced to migrate to Arizona by the change in law.

CSI estimates that HB 2569 will result in 2,361 universal licenses issued annually, and approximately half of those will be in the Healthcare Services and Construction sectors.  It is likely that at least some of those licenses would have been issued regardless of the new law, utilizing either an existing pathway for reciprocal recognition of another states license, or by the migrant traveling through the regular new license applicant process. However, a study of 22 licensed occupations by Johnson & Kleiner found that between-state migration for individuals with state-specific licensing requirements was 36% lower relative to members of unrestricted occupations. According to the Bureau of Labor Statistics, there are 162 million willing workers in the United States, and over 34 million have a license[vi]. Assuming a baseline Arizona domestic migration rate of 60,000 workers per year, then eliminating the frictions that reduce between-state migration of licensed workers should increase annual movement of workers into Arizona by nearly 4,997 people, all else equal – implying that the number of actual universal licenses being issued under HB 2569 is well below the “expected” number of movers who would be coming to Arizona but for the state’s licensing restrictions. Still, given that some licensing frictions persist despite the law and some occupations were already benefiting from other reciprocity arrangements, this latter number is likely an overestimate of the actual potential increase in migration into Arizona from enactment of HB 2569. These results nonetheless support CSI’s decision to use a scenario where at least half of recipients of universal licenses since 2019 are net new movers whose relocation decision was impacted by the change in law.

Economic Migration. Under its baseline scenario, CSI assumes the law will increase the migration of adults (aged 20-64) to Arizona by 1,181 people/year, beginning from and after 2020. CSI further assumes that these migrants would move for economic reasons.

Employment. Based on data provided to the Goldwater Institute by state licensing agencies, CSI identified six industry sectors which are both utilized by the REMI simulation and impacted by the new law. Under its baseline scenario, the direct annual new job growth by sector is expected to be: 772 in healthcare services; 739 in construction; 400 in personal services; 353 in real estate; 83 in professional services; 15 in educational services.

Training Costs & Time. Presumably, the benefits of the law come from reduced costs – in terms of both time and other resources, like direct expenditures on classroom instruction or on-the-job training – of licensure. However, CSI notes several caveats to incorporating these savings in its analysis of the dynamic impacts of the law. First, applicants are required to pay all regular licensing fees, and may be required to take any applicable state-specific examinations; they are exempted only from generic or national-equivalent training and examination requirements. Second, to the extent an applicant is induced to move to Arizona because of HB 2569, they would never have faced duplicative Arizona licensure costs but for this change and scoring those benefits would over-estimate its economic impact. Therefore, we assume these savings accrue only in a “no-sensitivity” scenario where all recipients of a reciprocal license would have been licensed regardless, and the only benefit is reduced cost and time of licensure. This is modeled as an assumed one-year reduction in time to employment in impacted occupations.

Given these parameters, by 2030, HB 2569 is projected to increase employment in Arizona by 15,991 workers; increase Arizona Gross Domestic Product by $1.5 billion; and increase the state’s population by a combined 44,376 people (particularly through increased in-migration of working age adults). Additionaly outcomes under alternative scenarios are presented on the fourth page of this report.

[i] Goldwater Institute requests statistics regarding universal recognition licenses from state licensing boards regularly and shared the aggregate results of those requests with CSI in April 2022.

[ii] This constitutes outcomes under CSI’s ‘medium’ scenario, which we regarded as most likely given the range of possible outcomes. Other possibilities are considered later in this paper.